When we arrived at Colombier airport, we did not think that we would come to talk about the fate of Iranian Jews during the Second World War. Yet there is a link between this ancient community and a red plane, partly dismantled, which is located at the bottom of a hangar…
This aircraft is a Navion. Aviation enthusiasts know it. Not the others. Navion owes its name to the manufacturer North American Aviation, who designed the NAvion in 1946.

The “Neuchâtel” example has been there since 1962. It has not flown since 2015.
This situation is unacceptable to Christophe Senehi from Bôle. He first made sure to get his pilot’s license, which took a lot of time and money. Then he created the Swiss Navion Club. His goal is to restore the aircraft, which is located in Colombier. Christophe Senehi estimates the cost of the operation at 100,000 francs. Participatory financing was launched in June 2021.
Why all this effort? “I wouldn’t be doing this much if I wasn’t passionate about it,” he begins, before sliding his hand over the wing of the Navion. “Look at this aircraft. It’s extraordinary, isn’t it? All the parts are of a very high quality. Then, after a silence: “There is also everything that is emotional.
For the person who bought this Navion is Claude Senehi, Christophe’s father. “I have known this aircraft since I was a child. I have often flown with my dad.
The Bôlois continues: “My father was the son of an Iranian Jewish family. During the Second World War, as a child, he found himself in Paris, where he had to hide his Jewishness to survive, before undertaking a long journey to return to Iran. A journey that ended tragically with the death of his mother in a refugee camp on the way. He spoke very little about the trauma he experienced. For me, keeping this plane was a way of saying: ‘I am free’ and also: ‘Never again! Let’s never forget.”
Claude Senehi acquired this Navion in 1962 with friends, from whom he gradually bought out the ownership shares. Thanks to his skills in aeronautical engineering, he was allowed to maintain his aircraft himself, which reduced costs. “He pampered it. He didn’t throw anything away, he fixed everything.” As a result, he managed to keep the Navion in its original condition until the end of its life in 2019.
“I inherited it. I decided to sell it. But I didn’t live well with that choice. I didn’t sleep on it anymore. And one day I said to myself: I’m going to keep it, do my licence, restore it and fly it! It was as if my father had sent me messages. I started sleeping well again…”
A photographer by profession (his studio is in Crissier/VD), Christophe Senehi does not have the financial means to restore the aircraft, hence the participatory financing. “With the dozen or so members of the club, we raised 23,000 francs. What works best is the sale of unique objects related to the Navion, for example, onboard instruments that are no longer in use.”
Donors and club members will have the privilege of flying in the aircraft and participating in aviation-related events. “We are also looking for companies, from Neuchâtel if possible, who would be willing to sponsor us by linking their name to the values attached to this aircraft, quality, durability, know-how and dreams for example.”
Initially, the engine of the aircraft, which dates from 1946, must be refurbished, as well as all the flight systems. “Can you believe it? It is 75 years old! The man from Bôlois points to much more recent machines parked in the Colombier hangar. “I have nothing against these planes, but frankly, next to the Navion, they look like nothing,” he concludes with a smile. The Navion is so modern that no one would imagine it was built in 1946, which shows how innovative its design was for that time.

On the website of the Swiss Navion Club, it is said that this aircraft “changed the history of light aviation”, i.e. that which is intended for tourism and leisure flights.
Light aviation took off between the two world wars. But tourist aircraft were still rare, uncomfortable and reserved for an elite. The Second World War brought many technological innovations. In 1946, the manufacturer North American Aviation created the Navion. Easy to fly, reliable and spacious, it could accommodate four people and luggage.
Considered the heir to the P-51 Mustang, the Navion aroused the interest of the American army. It is used as a liaison aircraft in Korea for personnel and cargo transport, as well as training flights. “North American Aviation had the skills, production lines and personnel to meet the demand.

The Navion in Colombier arrived in Switzerland in 1957 via Germany. It was first operated by the Fribourg Flying Club, before being sold to a private individual (who based the aircraft at La chaux-de-fond airport), and then to a group of friends, including Claude Senehi. It is registered HB-ESB. 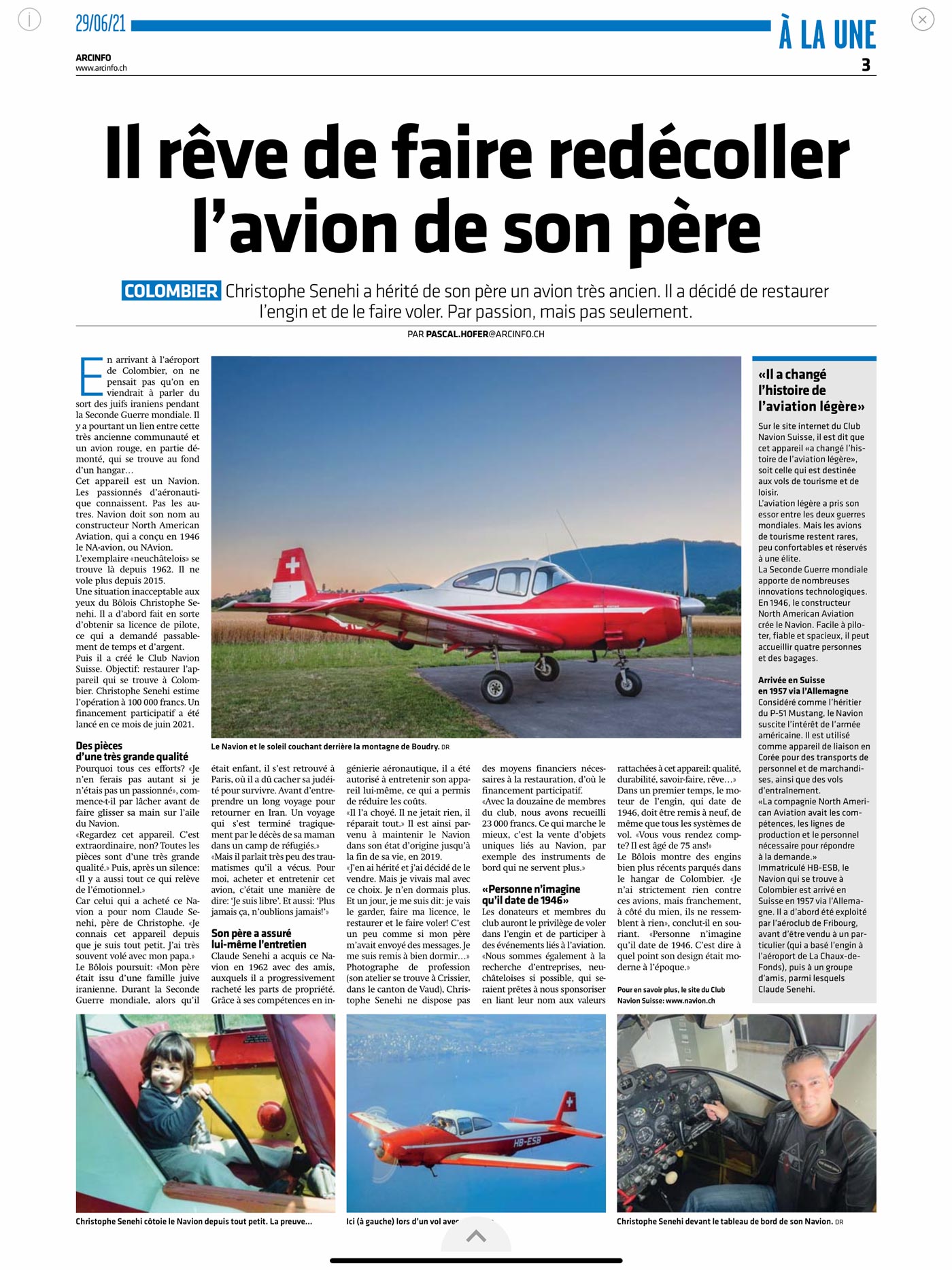